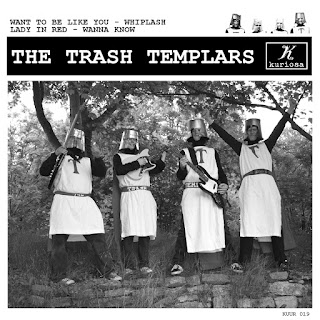 Kuriosa Records is very proud to present 4 killer snarly three chord garage raunch anthems from Bielefeld´s basement dwellers, THE TRASH TEMPLARS! Once a myth now a wild and raw rockin' primitive reality. Not so much a bloodline of Jesus but more a throbbing vein of the purest trash. Finally these four Templars step out of a world of obscurity and are ready to claim their major influence and fame on events world wide naturally starting at the bottom. Ofcourse I was present at one of their first outings in the real world at Jerk Fest, an obscure festival in the middle of nowhere, these masked Templars went as wild as you go being deprived of women and secrecy for centuries leaving us in a frenzy on beer soaked pastures. Luckily label boss of this fine label was present and was more than willing to introduce the rest of the world to this well hidden treasure of a band. Four stomping garage crazed songs by these defenders of the holy grail of garage punk collected on a piece of wax, the one you are holding right now! Mark K./ City Trash Releasedate: 21-11-2015 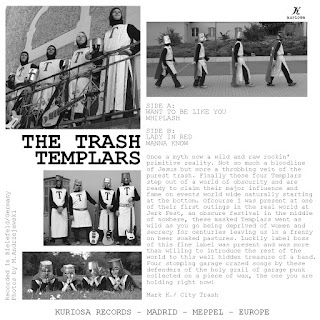